We have two Nepali birthdays this week! How exciting =)
I'll start at the beginning of the week with Sanzu's on Tuesday, and move on to Kuldeep's today.

Sanzu's host home is in Surya Pal, so it meant another trek up the mountain, plus then some. Meetum and I started walking around 9am because we wanted to avoid the heat as much as possible, because recently it is sure getting HOT.
Now I don't know whether I've got fitter over the last couple of weeks, or if I'm becoming more tolerant of having to walk up mountains, but this time it felt a lot easier walking up. Winning...!
Once we got to Sami, Meetum decided to wait for the others that started off a little after us, whereas I really wanted to get out of the heat, so decided to press on on my own.
This would've been wise if I actually knew where I was going. I must have walked back and forth three times, much to the hilarity of the local women, and within this time I was chased by a buffalo. Yes you read that correctly. I was only alerted to this fact by a woman shouting, me turning round out of curiosity and seeing a buffalo charging after me. It was honestly as if it straight out of a comedy movie. You can picture the movie scenario... bull chases after man. Man gets hit by bull. Man flies into air and lands in a heap of something. However this was real life and I had three options;
1) Keep walking and be killed.
2) Run off the cliff and be killed.
3) Run and be killed by sheer embarrassment. Yes those same ladies who find everything hilarious were round the corner and saw this whole debacle.
One of them finally took pity and led me to Lily and Sanzu's host home. It was a lovely afternoon and we even had a birthday cake! It tasted somewhat funky but a birthday cake in the middle of Nepal?!? Massively satisfied that day. 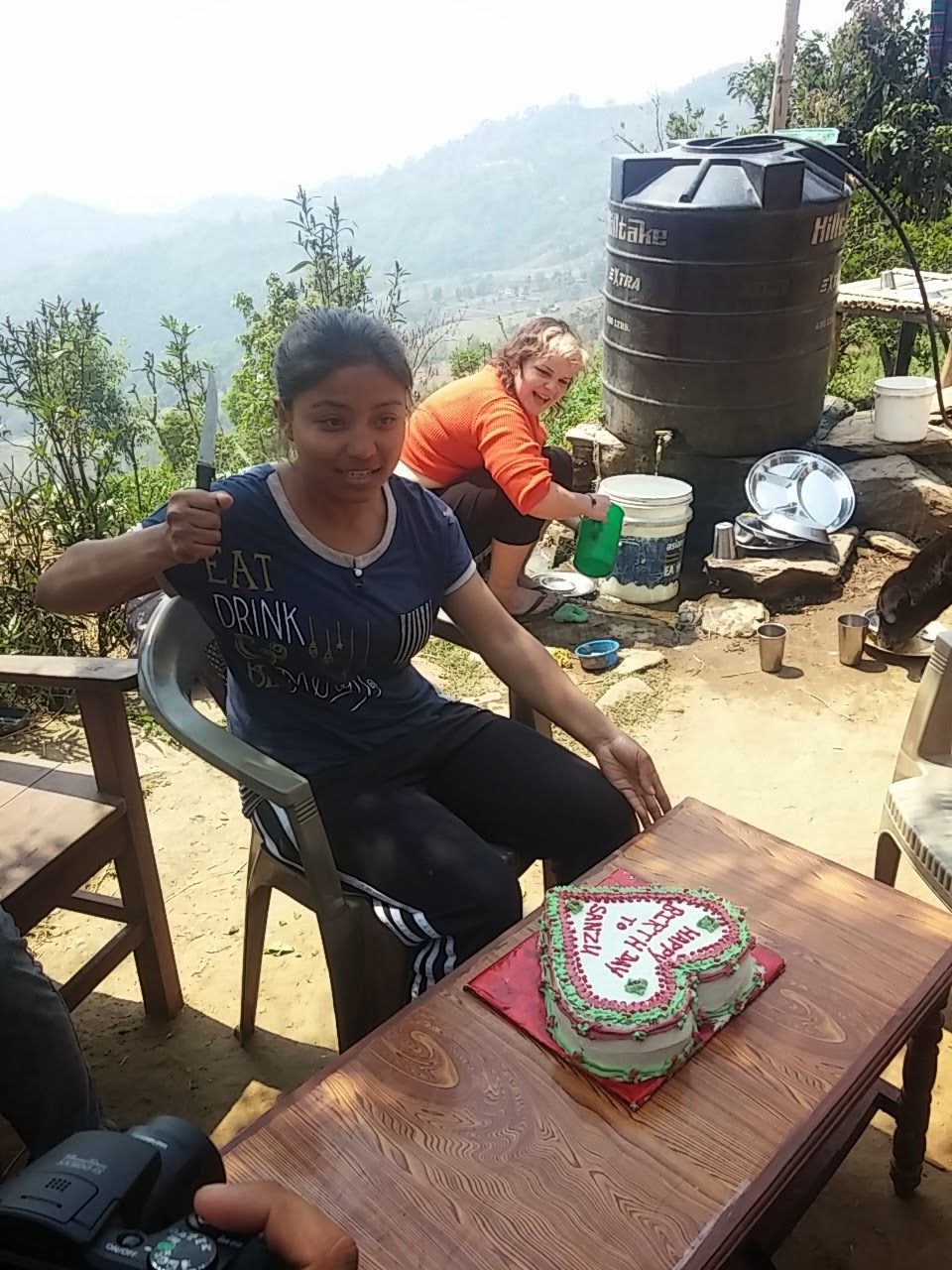 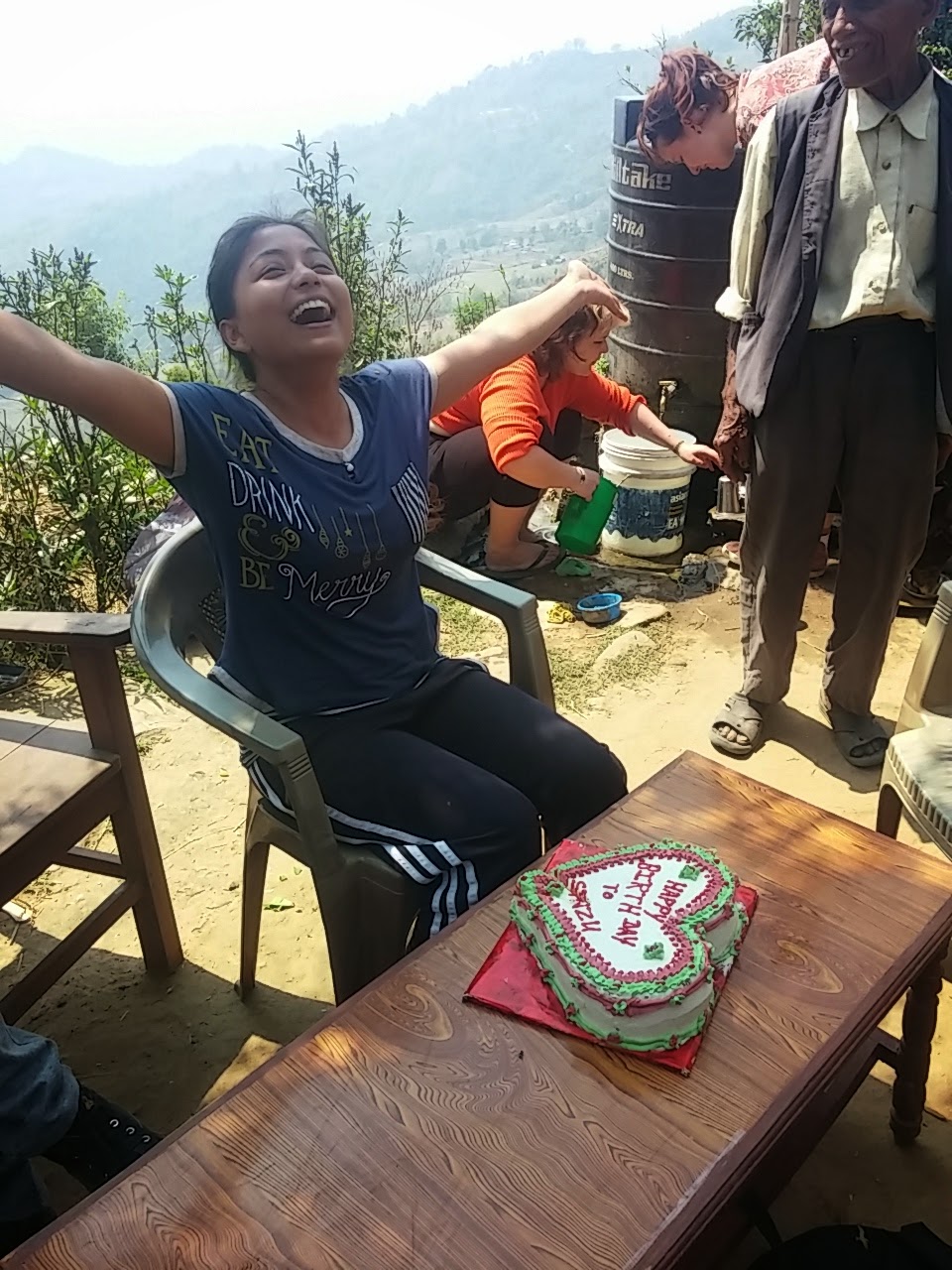 I got a bit too much sun, but that is not the reason for the bed-ridden part of the blog post title.

Yesterday I was cleaning my ears when I noticed blood from my left ear. I tried putting some drops in and then proceeded to get muffled hearing (sorry to any doctors reading this that think I'm an idiot. I know ok?). That's when it was time to visit the doctor. Turns out I have an ear infection and I'll admit that I was a big baby and cried. I think it was 1) the shock that I had an infection because I just thought it was blocked and 2) being in a foreign country ill isn't ideal. They gave me antibiotics (which I'm not taking as they seem to give them for EVERY ailment here), some ear drops and painkillers. Hopefully I'll be on the mend in a few days! What does make me laugh is that (touch wood) this is my first illness in Nepal and it isn't even remotely linked to an upset stomach. Funny that...

So today I'm missing the second birthday of the week which is Kuldeep. Everyone has gone to Rambazar (the furthest town away) to celebrate with him and I'm stuck at home resting. Boo!

Anyway, that's pretty much all that's happened so far this week. Our Waste Management Workshop has moved to Monday and the Community Health Programme is next Saturday. I'm going to get some more shut eye, because as they say, "Sleep is the best medicine". I say chocolate but I'm in bed right now and the shop is up the road so it'll have to wait.